I am innocent.the ATS has falsely implicated me in order to save their necks and to prevent being exposed as they could not catch the real accused. 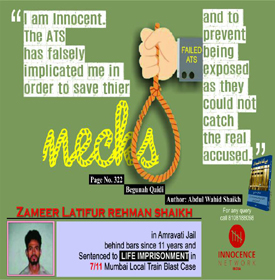 ATS implicated us in 7/11 blast case due to public and government pressure because even after two months of continuous investigation after blast ATS failed to catch real culprits of the Mumbai train blast. 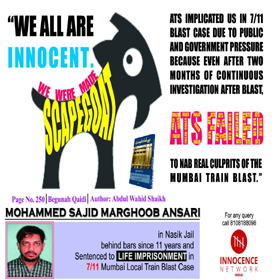 In 2001 while returning from my college to home police picked me up and put ion jail. since then I was harassed,tortured and finnaly ATS implicatedme in 7/11 case. 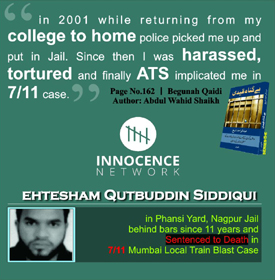 In December 2001,I legally obtained visa and went for Pakistan by Samjhauta Express to attend the wedding ceremany of my relative. This is the only reason ATS implicated me in 7/11 case. 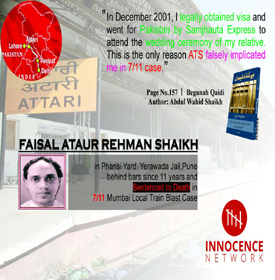 I did not take part in any bomb blast conspiracy.just sent a religious sms on 11 july 2006.did not know that i will ruined my life. 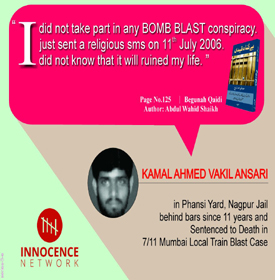 in 2000, I and some other people succesfully protested and had closed video parlours showing blue films and gambling dens in the Govandi area.the Hafta that they pay to the Police was slopped.therefore police threatened me that they would involve me in some big case and eventually they framed me in 7/11 case in 2006. 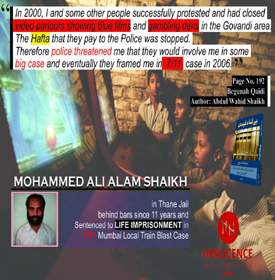 the fake witness of ATS,Mohammad Alam Ghulam Sabir Qureshi brought the police to my house and this way I have ben implicated in 7/11 case. 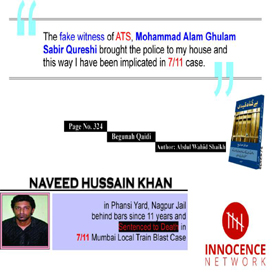 My business partner Mohammad Shakil has falselyinvolved me in this case to capture my business. he is a police informer. in collusion with his criminal brothers and the police he has involved me in the 7/11 case. 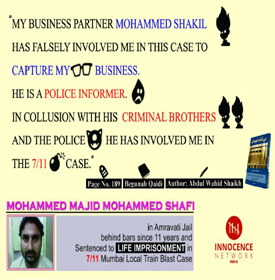 I was performing my duty as a doctor in sabo siddik hospital,imambada,Mumbai on 8,9,10 july 2006.I have produced before the court biometric attendance record and patient's medical papers written by my hand. (ATS fiction is that on those days he was in Govandi,Mumbai, for assembling the bomb.) 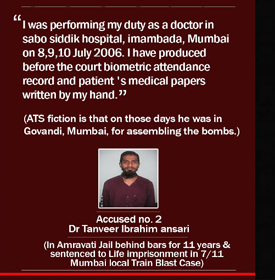 Lorem Ipsum is simply dummy text of the printing and typesetting industry. Lorem Ipsum has been the industry's standard dummy text ever since the 1500s, when an unknown printer took a galley of type and scrambled it to make a type specimen book.It has survived not only five centuries, but also the leap into electronic typesetting, remaining essentially unchanged. It was popularised in the 1960s with the release of Letraset sheets containing Lorem Ipsum passages.

The innocence network is an all India collective of individuals and organizations working for the rights of those who have been wrongfully prosecuted or convicted, especially under charges of terrorism. Led by exonerees themselves, the Network will be facilitated by senior members of the legal fraternity, policy practitioners, as well civil liberties’ groups. The Network seeks reform at the criminal justice level to prevent the practice of unjust incarceration. It also aims to establish support mechanisms for exonerees to help rebuild their lives post release.

Reform- Innocent Network seeks to work to minimize the instances of miscarriage of justice. Innocent people avoid wrongful arrests and convictions, police and prosecutors are given better tools to catch the real assailants, victims receive justice, and the public has greater confidence in the Innocent Network.

Through strategic legal work, policy advocacy, and public campaigns, the innocence network will seek a comprehensive legislative framework for compensation & rehabilitation of those who have been wrongfully prosecuted. It will also seek to improve case law through targeted legal work.

The Network will also attempt to seek reforms for each of the contributors to wrongful convictions – extraordinary laws that do not comply with international human rights standards, false confessions and torture, non functioning legal aid, unvalidated and improper forensic science, informants, government misconduct and inadequate defense, and post release surveillance.

Support: with the best years of their life behind bars and with little or no social or economic capital, coupled with the stigma attached to those who have been prosecuted on charges of terrorism, exonerees face the formidable task of rebuilding their lives as well as re-integrating in society.

Our support department will assist exonerees in various aspects including educational, economic, and psyco-social rehabilitation. The network will also help them negotiate the intense pressures of post-release media attention as well as state surveillance through community integration and counseling services.

Peoples Tribunals are one of the most effective means of calling attention to unrepresented and unheard voices of those wronged by the system. Towards this end, we are going to conduct the first Innocence Network Tribunal on 2nd October 2016 at the Constitution Club of India from 11 pm onwards. The Tribunal will consist of a Jury headed by a retired judge along with other distinguished members from the legal fraternity as well as the larger civil society.

While survivors of innocent exonerees have bravely led individual struggle(s), their effort would be meaningless without larger societal participation in the process of undoing injustice done to them. The public tribunal aims to ensure that the question of justice in these cases does not remain merely legal or policy oriented but also a moral one. The purpose of the Innocence Network Tribunal is to articulate and address the grievances of the exonerees and also ensure effective reparation so that justice is seen to be done. 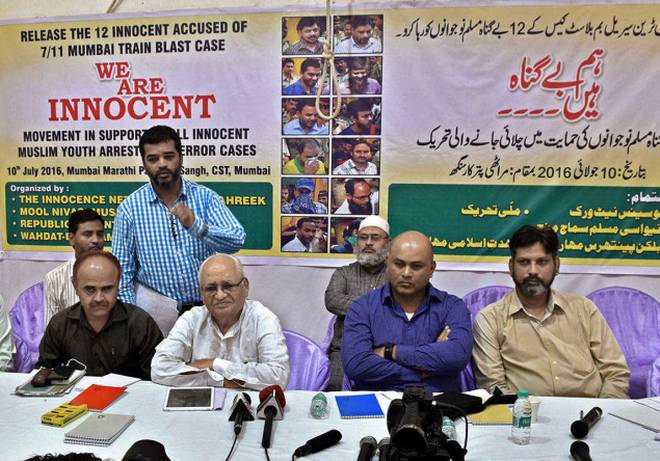 Relatives of the convicts in the 7/11 Mumbai train blasts case have demanded that their kin be released, even as social organisations, political parties and lawyers said the police should look for the ‘real criminals’. They also said there was a need for a change in the way the Muslim community was being viewed by society.